About a year and a half ago, I made a bunch of string blocks for an experiment. I wasn't thrilled with the result, so I put the remaining blocks away to use later. I decided that this week was "later" enough!

I simply wasn't happy with the broad white stripe down the center of each block, so I decided to cut them up.

I had some other blocks without the white stripe, so I thought I'd combine the two types in the blocks.

I tried a layout, but the arrangement of the white strips wasn't ideal.

Still not satisfied, I trimmed the white strip completely off the first set of triangles and paired them with triangles from the second group in which the strips went a different direction.. 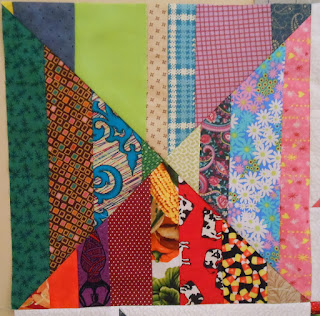 I liked the result; however, a whole quilt of these blocks would likely have been a crazy-making sight! Hmmmmm............

I didn't want to go with a completely plain alternate block--the blocks are 11", so that would be too much plainness. How about an alternate block with quite a bit of plain area, but interest in the middle? I still had lot of string blocks to use, so I tried a pieced alternate block. 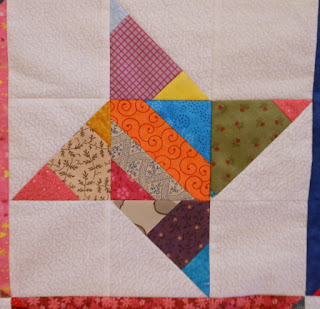 This friendship star block seemed to fit the bill--enough background to settle the craziness, but enough interest not to be boring. I cut the string blocks to form the star, so it ties to the rest of the quilt.


They were easy to set together--very few seams to match. 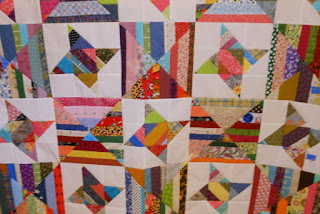 I'm pleased with the look of this. It isn't finished (I'm still thinking about a border), but I'm really glad to have put these to use. I still have string blocks left, so there may be more experimenting with them in my future!

Posted by TheEclecticAbuela at 9:34 AM