I've been hand quilting the Vintage Double Wedding Ring, and I have the callouses to prove it! It is coming along well, but I have no idea when I will finish--it's a long-term, no-rush project. 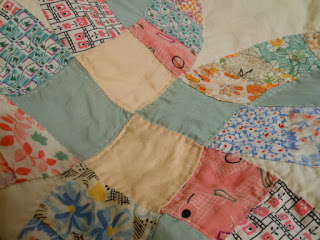 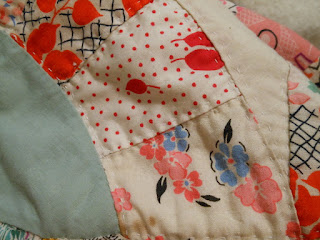 I'm enjoying the fabrics and the original maker's choice of arrangement. I often wonder as I quilt what was made of these fabrics since I assume that most of them are leftovers from clothing construction. So much history is in here, yet I don't know who made the quilt. It seems sad that so much work wound up in a flea market, but I feel lucky (and honored) to now be able to finish it.
Posted by TheEclecticAbuela at 12:51 PM 3 comments:

I mentioned this quilt a few posts ago, and I just finished it last night. Quilts don't have to be complicated.  Four fabrics, two colors, one block--perfect for napping. 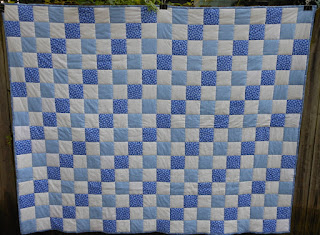 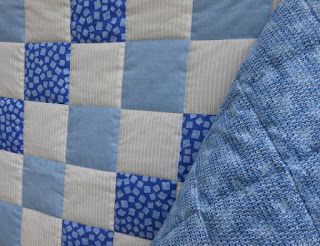 Posted by TheEclecticAbuela at 9:38 AM No comments:

This was an unplanned quilt. I simply pulled out scraps, grouped them by color, and put them together using a mystery quilt pattern from a quilting forum. I had a tough time getting my seams to match, for some reason, but the brightness of the finished quilt makes the problems less noticeable.

I pieced the back since I didn't have enough of the print to match the quilt size, and I quilted it in a simple, straight-line grid. I used a piece of fleece for the batting--it will be warm.

Sometimes, unplanned works out just fine. This is a lesson I keep needing to relearn. 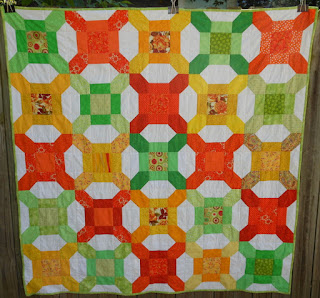 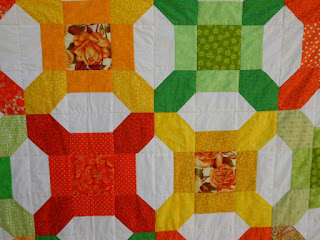 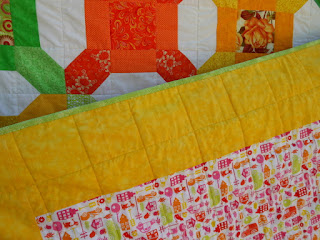 Posted by TheEclecticAbuela at 10:35 AM 2 comments:

Playtime at the Hacienda (Part 2)

I've been working on the string quilt I mentioned here. My idea for the layout was to try to make the string blocks look like floating triangles. I used a white 2.5" strip in the center of each, and I sashed with the same fabric and strip width.


Here I placed the white strip in the center and built the block from there. 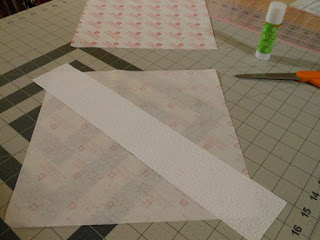 Here are some of the completed blocks. 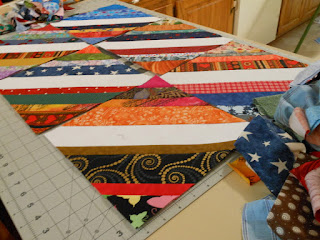 I am ready to add sashing to the bottom of the block. Make sure all the white strips are going the same way as you do this. 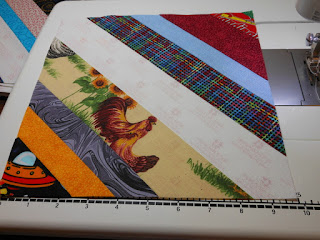 Sewing the sashing strip on bottom of block. 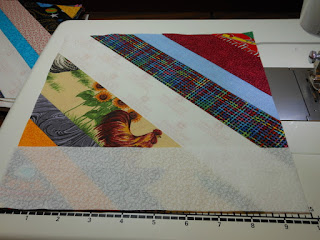 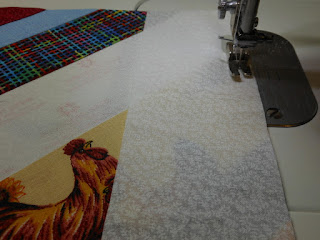 Press the sashing back from the block. 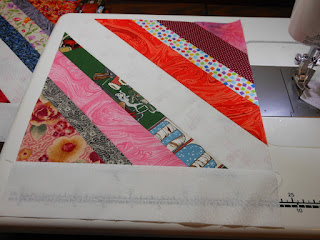 Add the second strip to the right side of the block. 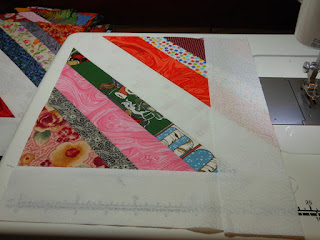 Press back the second strip. Apply these strips to the bottom and right side of all your blocks.


You will have to put sashing on the left side of your far left column of blocks. Lay out your blocks to decide which ones need the left side sashing.


Your top row will need sashing along the top of the blocks. 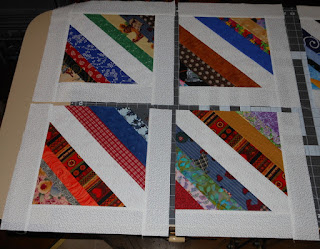 Sew your blocks together into rows, and then sew the rows together to form the quilt top. 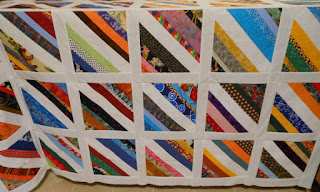 I had hoped that this layout would isolate the triangles making them look as if they were floating, but it doesn't appear that way. The secondary pattern is more of a broken, diagonal line formed by the colored part of the string blocks--pretty, but not what I had in mind. 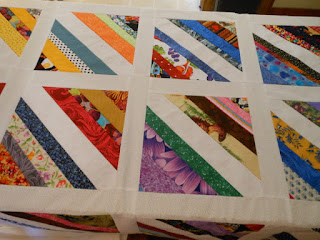 I'll have to make some more blocks and try again. I think perhaps a different arrangement will produce the effect. Rather than making all the white strips go the same direction, perhaps turning some of them will create the look I want.


Oh darn, I'll have to play with more fabric! :)
Posted by TheEclecticAbuela at 1:43 PM 6 comments:

My daughter found this for me at a flea market. It is all hand-pieced. The fabrics are mostly cottons, though I think a few may be blends of some sort, and I suspect a few to be silk. I decided that to preserve the vintage piece and to honor the person who made it, I will hand quilt it. 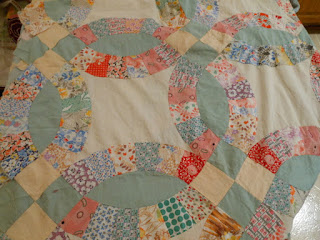 Since the fabrics are old and delicate, I chose to go with a very stable, low-loft cotton batting. 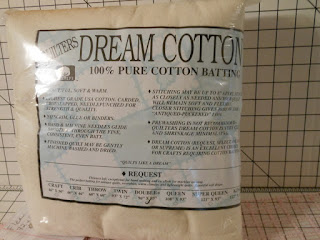 I chose a floral print for the back. Muslin would likely be more correct for the period in which the top was made, but I wanted some color and interest in the back. 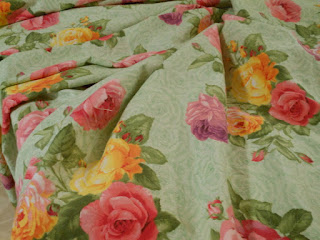 Instead of my regular glue basting, I am pin basting this one. Sometimes the dried glue can be difficult to sew through by hand, so I'm trying to make it a bit easier on my hands by using the pins. Three hundred pins later, here is the top. 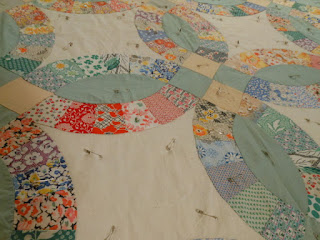 I'll show my progress as it goes along. So far, even though my fingers are sore, the quilting is coming along nicely.
Posted by TheEclecticAbuela at 3:18 PM 3 comments: 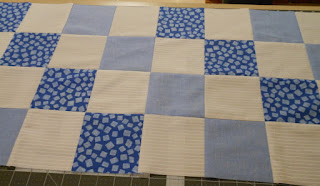 Easy, pretty, and not fussy. Embrace simplicity.
Posted by TheEclecticAbuela at 3:22 PM No comments: