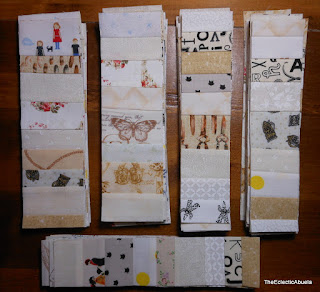 This clue went quickly--I have such fun string piecing that time seems to fly. Narrow strips like this can stretch, so I'll leave them on the paper foundation for now and take them off as I use them. 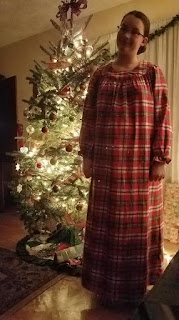 On another note, I got this great picture of my granddaughter in the nightgown I made for her for Christmas. I love pictures that show things I've made actually being used!


Happy New Year--I hope it is a joyous and prosperous one for you.

I'll be linking with Quiltville's Mystery Monday.
Posted by TheEclecticAbuela at 5:09 PM 12 comments:

It was a fairly easy clue this Christmas week. I'm looking forward to the next.

I'll be linking to Quiltville's Mystery Monday.
Posted by TheEclecticAbuela at 11:29 AM 6 comments:

An anonymous lady, on a Facebook group to which I belong, worked through the administrator of the site to do a Santa Angel giveaway leading up to Christmas. She said she had fabric and other things that she wanted to share. My name was one of those drawn, and I received the package today.


A big Thank You to the Santa Angel. Happy Holidays!

Posted by TheEclecticAbuela at 11:08 AM No comments:

Email ThisBlogThis!Share to TwitterShare to FacebookShare to Pinterest
Labels: Red/Pink

About a month ago, I organized my fabric. I pulled out all the leftover flannel scraps from other projects and started cutting them into usable sizes.


I've sewn the kids' quilt tops together and have started on those for adults. The layout is random, so I can just sit down and sew these. I plan to use flannel backing to make these really snuggly and warm.


There is a lot of sandwiching and quilting in my future, but I'm glad to have a plan for these flannel leftovers.

Posted by TheEclecticAbuela at 1:37 PM 2 comments:

I was so glad to have a clue involving strings this week from Bonnie Hunter's mystery Good Fortune.


I am substituting yellow/gold for the orange that Bonnie chose. 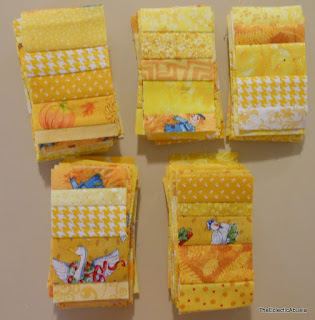 I am enjoying this project--and I've actually been able to keep up so far! 😺

Posted by TheEclecticAbuela at 1:31 PM 13 comments:

So far, I'm keeping up with the clues in Bonnie Hunter's mystery quilt, Good Fortune.

Here is a sampling of my units from clue 3: 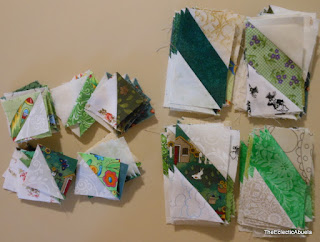 I love having little up-close surprises! 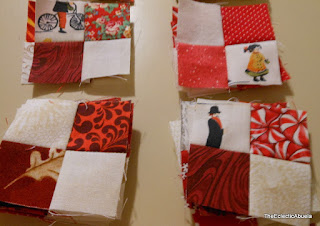 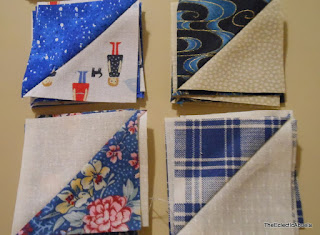 And a selection of each 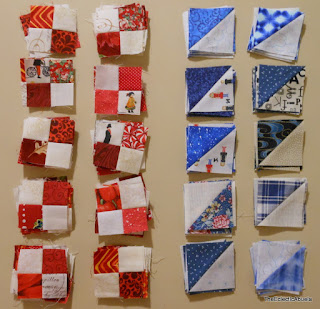 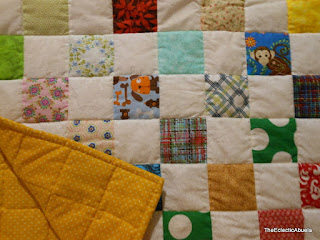 
Soon it will be time for Winter Break--yay! I'm ready for some serious quilting time. 😀
Posted by TheEclecticAbuela at 2:04 PM 6 comments:

Work has had me so busy this semester, that I haven't taken the time to post. I'm working on a few projects--mainly some donation quilts that  I'd like to have done and taken to the agency for distribution  before the busy Holiday season. I'll catch up with pictures and posts eventually. For now, here's proof of life.


Any one else out there have a day job that cuts into your quilting time? 😀
Posted by TheEclecticAbuela at 11:17 AM 2 comments:

The Blogger's Quilt Festival is on at Amy's Creative Side. Join in and take a look at all the wonderful quilts featured there.

This quilt is an original design I call Stars on Strings.

You can see how I made it HERE.

Thanks Amy, for the opportunity to share and to look at beautiful quilts from many other quilters.
Posted by TheEclecticAbuela at 11:42 AM 14 comments:

The Blogger's Quilt Festival is on at Amy's Creative Side. Join in and take a look at all the wonderful quilts featured there.

My quilt is an original design I call Boxes of Strings.

Thanks Amy, for the opportunity to share and to look at beautiful quilts from many other quilters.

Posted by TheEclecticAbuela at 11:32 AM 11 comments:

This quilt began on graph paper. I have an EQ program, but I was defeated by triangles!


I tried this more than once. My first experiment was to use regular, brightly-colored strings.

As you can see, the red stars are lost amidst the chaos!

I went to neutral strings which worked better to show off the stars.


I stayed with this idea, though, for me, it was hard--I always want MORE COLOR!

The making wasn't too hard, though 60 degree triangles can be tricky to assemble. It was simple string piecing for the blocks.


I didn't get a picture of the step of gluing the triangle to the foundation, but you can see its placement here. After the triangle was secured, I simply string pieced the three areas around it.


When I had finished the pieces, I assembled it in rows. 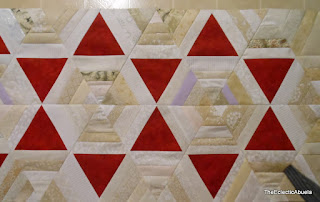 This is when the stars and hexagons show up--you have to keep the faith through the piecing; they will eventually be there!


The edges of a triangle quilt are uneven. I didn't want to trim off all the piecing work to make them straight, so I pieced some half-triangle for the ends.

I did these half-triangles with neutral centers, so as not to distract from the star pattern. I also used a narrow (1.5") coping strip (border) at the top and bottom of the quilt, so I could manage my triangle points better for binding. I didn't want to lose them. 😉

I had intended to use a pieced backing, but with the weight of all the strings on the front, I was afraid it would be too much. Instead, I chose this backing fabric both because of the color and the pattern--the hexagons echo those on the front. 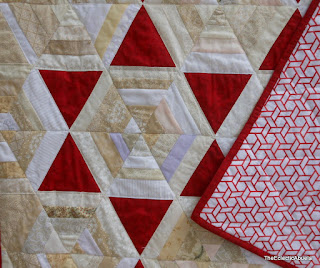 All in all, this was a successful experiment, though I must admit that I am heartily sick of neutral strings for now! 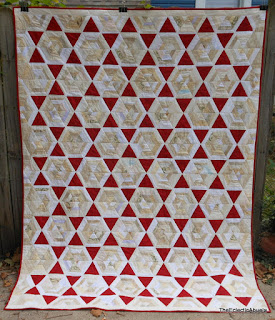 Now, please, bring on the color!

I'm linking with Jo's Country Junction String Challenge,  Fiber Tuesday 167 at The Quilting Room with Mel, and Confessions of a Fabric Addict.

Okay--you can call me the crazy mystery lady!

I love making mystery quilts. I have a friend who works them up for a forum to which I belong, and I love her designs. The forum thread from which this quilt is made begins HERE.


I'm done with summer--bring on the Autumn!

I'll be linking with Fiber Tuesday 166 at The Quilting Room with Mel.
Posted by TheEclecticAbuela at 4:25 PM 3 comments:

I have always enjoyed looking at sampler quilts, but I've never made one. I have decided to change that. 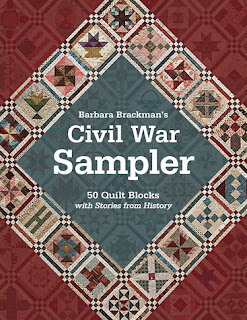 I may not make all fifty blocks, but I hope to complete enough for two quilts. I'm doing each block in two different color combinations, so I can divide them into two groups of different blocks.

I have a box of Civil War reproduction fabrics that I am using. I'm not very familiar with the fabrics, or the way they should be combined, but I'm enjoying the process.

Here are the blocks I have so far. (Note: Each photo shows two blocks from the same block pattern made with different fabrics.)


I am making 12" blocks. These are larger than I normally do, but the cutting instructions for the blocks are clearer for the 12" size rather than the 8" size. The instructions are different from those I prefer, in that there are no unit sizes for the parts of the block. I usually rely heavily on those measurements to keep things uniform. I also have used some different techniques than the book shows--but, to each his (or her) own.

I'm enjoying this new experience and experimenting with some different fabric prints than I have used before--lots more to come!

Posted by TheEclecticAbuela at 4:39 PM 8 comments: