I love Autumn (She says as she sweats through summer!), so I also love autumn fabrics. I decided to put some together into a quilt using Bonnie Hunter's "Bricks and Stepping Stones" pattern.

Bonnie's pattern can be found here: Bricks and Stepping Stones

Not long after I started the quilt, Missouri Star Quilt Company did a video tutorial on a very similar quilt: Four-Patch Frenzy

My quilt is a different scale than either of these, but the end result is much the same. Here is how I did it.

I had several fabrics to choose from--too many, in fact! 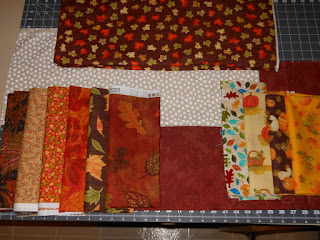 I knew I wanted to make the four patches out of constant colors to tie everything together. I chose the reddish brown and the creme that you can see here in the center of the picture.

The brown background leaf print at the top was one I had several yards of, so I chose it for the backing.


While all the prints had colors that coordinated, they seemed to divide themselves:

I liked the look of the darker group better, so I chose to go with that set.

Since the four patches were to be all the same, I was able to put them together using strip sets. 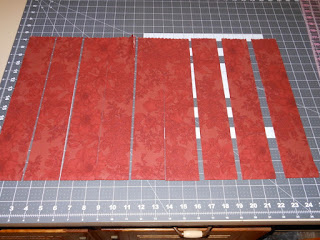 Then I repeated the process with the creme color. 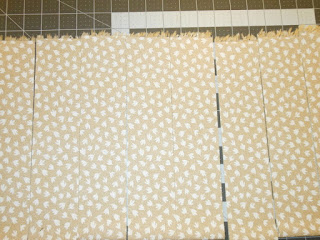 To make a strip set, sew one dark strip to one light strip down one long side (right sides together. 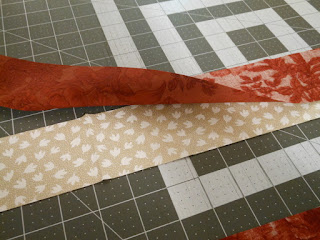 Before pressing the strip set open, sub-cut it into 2.5" pieces. 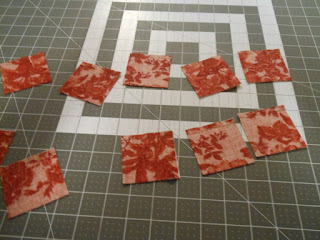 Press these units open with the seams toward the darker fabric. 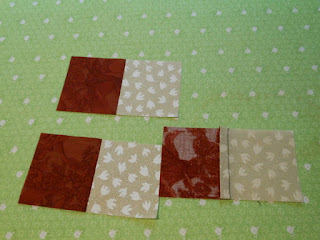 You will now sew these together to form a four patch. Because of the direction you have pressed, your center seams should nest snugly together. Pinning the centers can help you keep your seams aligned.


Press the seam of your four patch. In this case, the pressing direction doesn't matter. 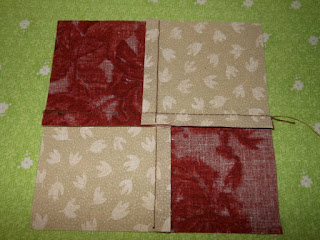 Your finished four-patch unit will look like this, and it should measure 4.5" square. 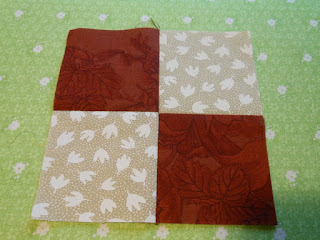 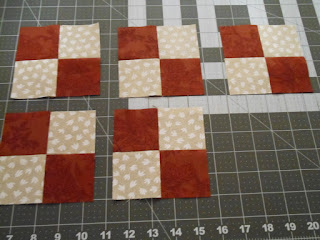 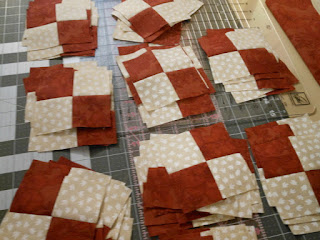 The larger portion of the block (the Brick) in my quilt was cut at 4.5" x 8.5". I tried to get approximately the same number of bricks from each autumn leaf fabric, so I could have a good mix in the quilt. I needed 75 of these for my quilt.

Each block of this quilt requires one four-patch and one brick. (These are rectangular rather than square blocks.)

Sew one four-patch to the end of one brick. Take care to always keep your four patches facing the same direction--this will create the mini-chains in your finished quilt. 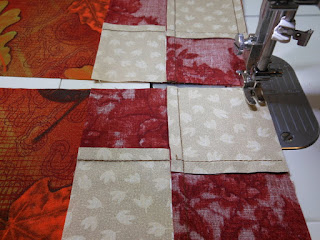 You can chain piece these--feeding one block in after the other without cutting the threads between them. This can save time and thread. Here is a set of chain pieced blocks. 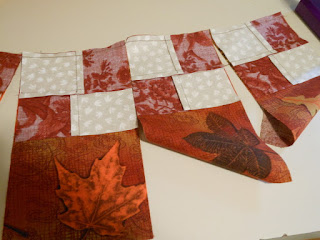 These can then be clipped apart. I have a handy little gadget for this (I chain piece a lot!) called The Cutting Gizmo. The slot on the top holds a razor blade, so you just pull the thread between units down on it, and it cuts. I like it because I have both hands to handle the fabric units instead of needing one for scissors. This is purely a nice-to-have thing--certainly not a necessity.

After you have completed your blocks, press the seams toward the bricks. 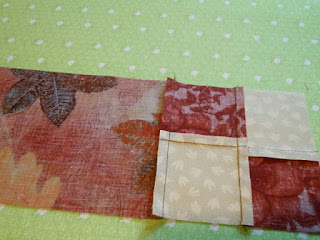 This is your completed block. 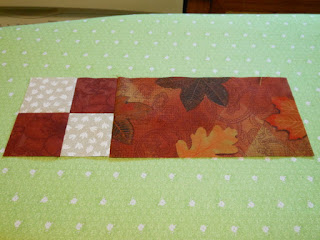 Lay Out and Sew Your Rows Together

The next row is the same. 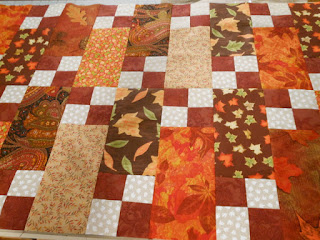 My quilt took five rows of fifteen blocks each. 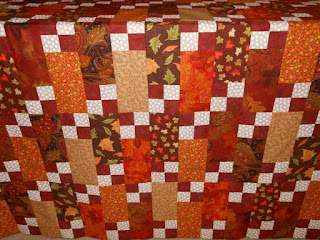 You may choose to add borders if you wish.

I quilted mine with a straight line 4" grid--nothing fancy.

I chose the binding from among the leaf fabrics I had left over--a scrappy binding would work, too.

Here are some pictures of my finished quilt. 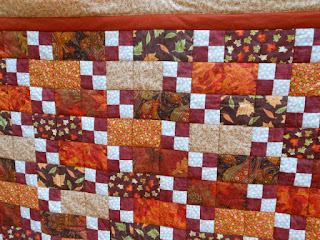 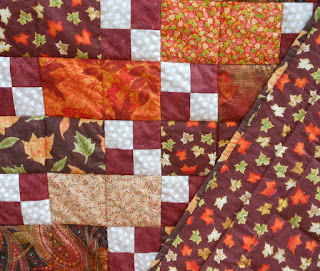 This is a pattern that goes together easily, and it would be suitable for many types of fabrics--maybe Christmas prints, or a baby quilt, or a patriotic theme...

Posted by TheEclecticAbuela at 8:06 PM