A Wagga is an Australian utility quilt (also sometimes termed a Wagga Rug).

Its origins lie with men who traveled across country working as shearers, drovers, or farm laborers. Often called swagmen, they slept rough, and the wagga was an essential part of their gear. It might be used for warmth, to keep off the rain, or as a groundcover for sleeping. Waggas were made of found materials--hessian bags, jute flour bags, etc.--sewn together with twine. Batting might include old clothing, bits of fleece from the shearing, and even, in some cases, newspaper. They were roughly made for hard use.


Note: Clicking on the first four photographs will take you to links about them.


In later years, the wagga became a domestic item as well. Tailor's samples of wool suiting, household bags (such as sugar or flour bags), and printed feed sacks were used by homemakers to create warm quilts for use by their families. Construction of these waggas was more refined. The fabric was cut and the pieces sewn together as patchwork.

The wagga is thought to derive its name from the town of Wagga Wagga, New South Wales, Australia. The flour mill there used wheat bags and jute flour bags, and according to Wendy Hucker, writing for Australia’s National Quilt Register, “There is anecdotal evidence that the Wagga Flour Mill late last century [19th] and early this [20th] had a special place where staff put flawed wheat bags and 150 lb. jute flour bags that couldn't be reused. The men were welcome just to collect these. One way or another opportunity and necessity in the Wagga district reflect the origin of the wagga."


When I first heard this term, I was intrigued. I have no connections to Australia (I've never even been there.), but the idea of a utility quilt sewn in rough conditions of found materials caught my attention. I have since made a couple of waggas of the domestic type. Of course, I had to purchase the materials, but I tried to construct them simply and make them warm. I found wool-blend fabric (54" wide) on sale for less than $4 per yard (traditionally thrifty!), so I was soon on my way.

This wagga was my first. It is made of wool-blend coating fabric. I washed the fabric in hot water and dried it in a hot dryer before making the wagga. I wanted to see if the fabric would stand up to the heat, and I'm glad to say it did very well. It didn't felt or shrink as pure wool would, so I cut it into bricks and sewed them together. I used a washable wool batting, and wool-blend backing, and rather than quilting with stitches, I tied the layers together with #3 cotton thread. It is very warm, it washes well, and it is not unattractive. The only drawback is that the wool-blend backing is a little itchy next to the skin. 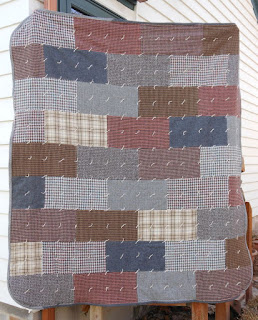 This was my second wagga. It is made the same as the first, but I backed it with cotton flannel--goodbye itchiness! The top pattern was even simpler this time--just wide strips of fabric. I rounded the corners on both of these waggas--trying to miter a binding corner with such thick fabrics would have been very difficult. 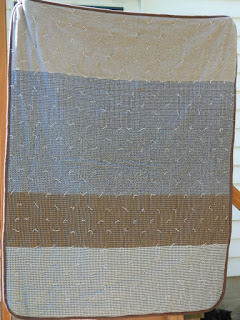 I have some more wool-blend fabric (in pinks!--what would the swagman think of that?) waiting in the wings, so I will be making more waggas in the future. I enjoyed making these especially since I was learning the history of the traditional wagga along the way.